Before Glory Hunters Part 3: The search for glory.

Thank you to stop by and read some of the story of how Glory Hunters is being created. As always I appreciate the likes and comments you can leave on this devlog.

Taking a small break from the Kickstarter campaign (we are at 80% of total funding which is insane! Wohoo! And there is less than half of the collector’s editions gone by now which is unreal to me ha ha ha, thank you all for supporting the project!) to write this devlog. Sorry it take too long. Here we go.

So it was the first 10-15 days of July and I had an incomplete prototype that was a walking simulator. While I loved the concept, there were no item implementation (at least obtain something to give it to other NPCs), neither the RPG fight mechanic I had in mind (Earthbound or Dragon Quest style). The consequences I wanted each of the NPC to have towards the players action were getting too complicated to design (doable, but was taking too long for a quick prototype because almost every reaction relied from each other for actual progression within the game).

Just as I mentioned in the last devlog, around that time I discovered the possibility to make a Zelda styled game within GB studio, and since TLOZ: Link’s Awakening has always been an important part for me as a gamer I jumped quickly to the idea to create something similar myself.

In a way I wasn’t starting from zero. I got used to GB studio and figured it out how to make things most basic things work and although many assets created for “The Blind Rabbit” wouldn’t work in this type of game I still had some that I could reuse such as the NPC design, trees, bushes, the main character and some flowers and grass for the backgrounds.

I started creating the new prototype with something I found interesting in “The Blind Rabbit” which were the values I added to change NPC conversations and how to make their health go low every time you talked to them.

I figured I’d make use of them to keep track of how many stuff you have done within the game to use it later. But then, as a World of Warcraft player I figured: this are how achievements are done, they keep track of what have you done in the game and reward you once you hit a certain number. What if I could use this as the main mechanic?

I remembered this part of A Link to the Past which you have to drop rupees over and over again at a fountain to get bombs and arrow upgrades. And while this was somehow tedious I really (as a player) liked to be one of the first things to do while I played it. It made feel “prepared” ha ha ha, just like in other Zeldas when you try to get all the pieces of heart (health upgrades) possible and buy every item you can before you enter the first dungeon to feel really strong. 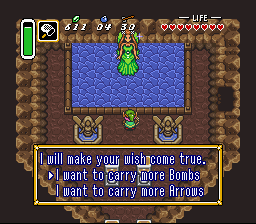 This idea merged while playing with the values of this new prototype since the objective was to add the “formulas” I loved about Zelda.

I started to think which “achievements” would work with these values and started testing them using only three scenes (three screens of gameplay). This achievements later on would turn to "Glory". 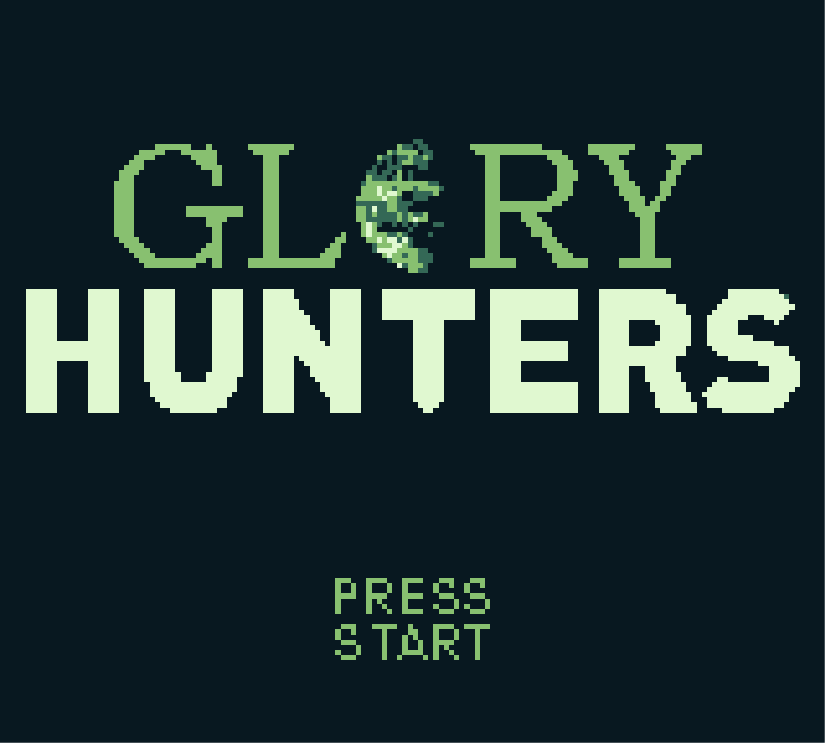 In the first one you would start the game, you could cut bushes (because as a Zelda fan that’s a must ha ha ha) and save your game.

As the prototype was made and I showed it to my friends I discovered that once they got the main mechanic (getting achievements) they would play differently. Some of them would rather talk to the guard five times (button mashing A constantly) to get their first achievement while others cut the bushes. When they discovered they could bypass the guard by only saving the game I could see a smile in their faces, because that meant they were free to choose whatever option they liked to progress through that guard. 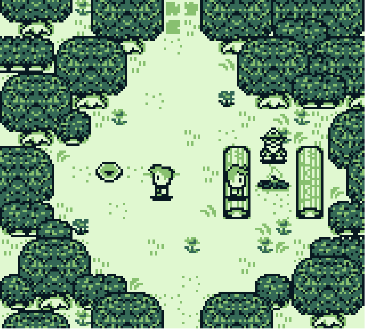 The rest just came naturally to the design: think in more ways they could achieve things, either playing mini-games, obtaining items or defeating enemies.

While the idea started to grow easy I must say that balancing the game was not (and still needs some work on that end). Some achievements were really hard to get and caused a lot of friction to the player which became boring with time. I still wanted hard achievements to make the player feel satisfaction when they got rewarded by obtaining them, but something had to be done.

I downscaled the first achievements to only require an action made five times to award one point. Originally it was around 10 or 20 which sucked ha ha ha. But that helped the “flow” of the game to be much quicker and to discover more actions while leaving the easy ones behind. 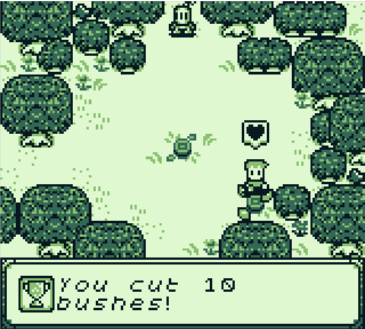 Around that time I figured that this achievements would give you the points needed to buy stuff or pay the guards blocking the players path, and they turned into the main currency (currency gives a lot of juice to a videogame of this nature, name it rupees, gil or gold depending on what RPG are you playing).

Later on I started playing retro games using the “Retro Achievements” service using Retroarch, and discovered a whole new world that could turn an old game into a new experience by just playing with certain rules to obtain some achievements. I didn’t have time to implement this kind of achievements but I knew they were totally possible to give a counter to how many times you have used the sword or a variable that would turn to true if you were hit by an enemy to obtain achievements such as “don’t get hit by X” or “only use the sword in this area X times”. 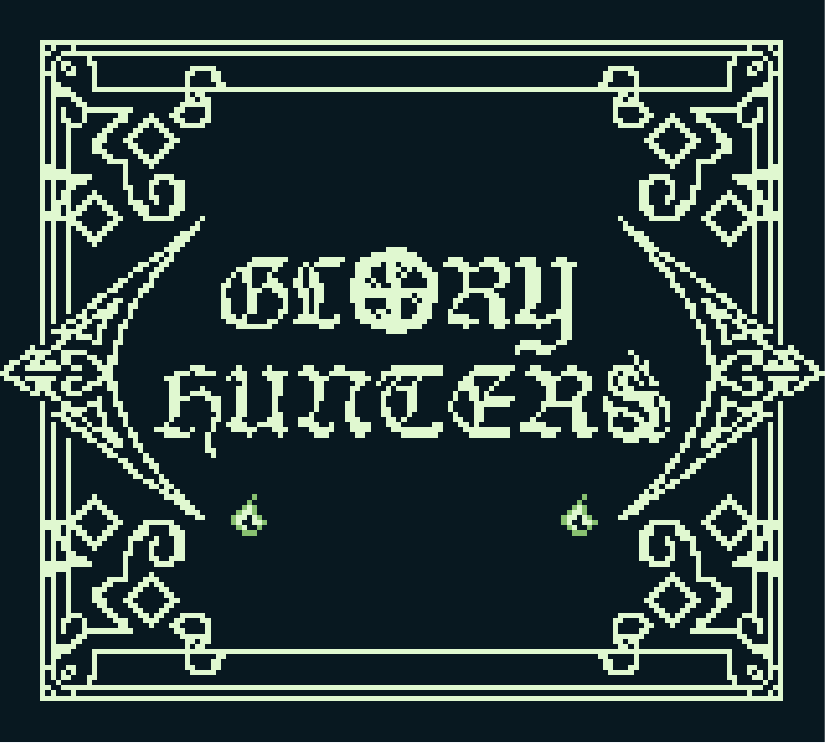 I told my wife that I had this idea that could work but I had to work hard before my second son’s birth, so I told her that I needed to go FULL DPS (full damage per second, a term used in MMORPGs lol) on development to finish by the time the baby arrived.

The days I wasn’t scripting and creating pixel art by 2:00 am I tested the game when I arrived home on what I called my “GB devkit” ha ha ha. A modded Game Boy Color and a flashcard I purchased only for this purpose. 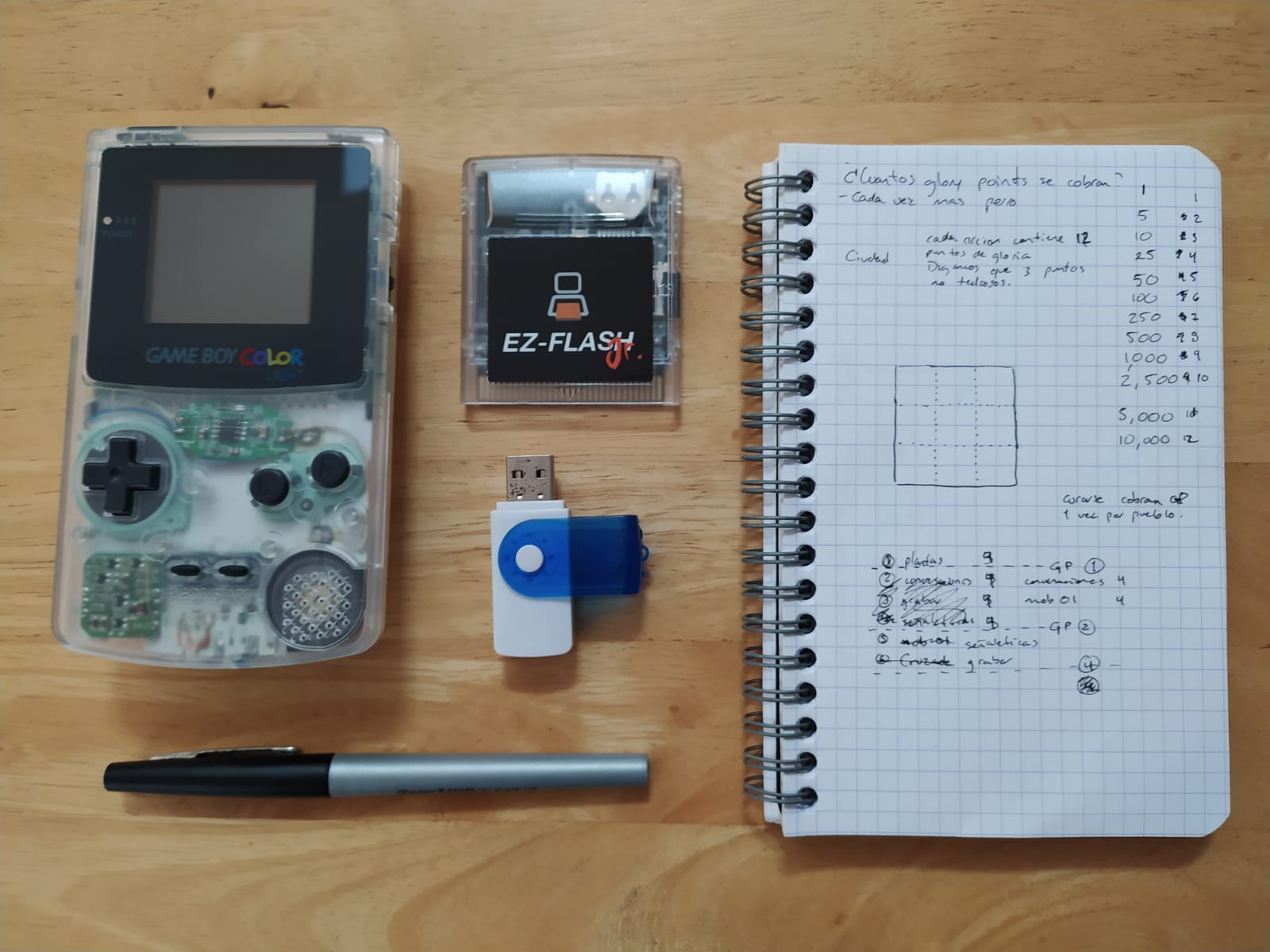 Later I bought an Anbernic RG351v because it was faster to add the new build and play it using retroarch, but I always tested the game eventually on original hardware. I even got a Game Boy Pocket around that time to test the diferences of how the game would be perceived in different devices (and because I really love all GB related stuff ha ha ha).

I worked by day, and played the builds by night, writing every single bug I found or changes I had to make in a small notebook. I was constantly making changes to the sprites, the backgrounds and to the scripts to make it work. I even took a few minutes to upgrade the start screen every time I could (just as you have seen in the screenshots). 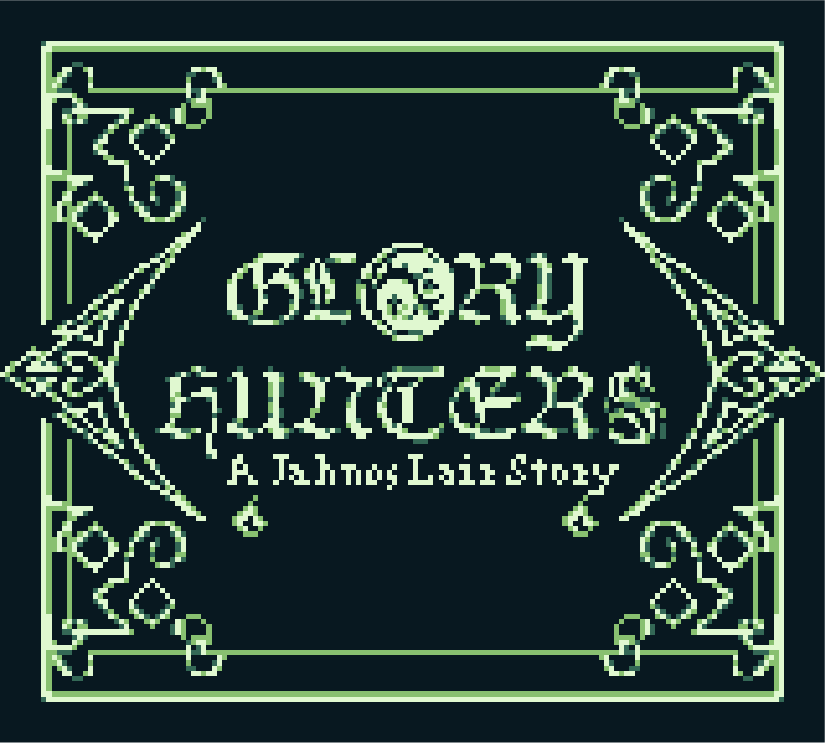 August came… but that will be for the next devlog.

Thank you for your time reading this and for the interest in the project. As always: If there is something that I have missed and you have a question I’ll be happy to give you an answer.

If you haven't dropped down to the Kickstarter campaign please do and tell your friends about it! Help us spread the word to reach true glory!

I appreciate your time reading this. I wish my writing was better and have more time to really polish the content but know all is shared with love and passion. If you come up with something specific you want to know around the project feel free to ask! Thank you and have a great one :)